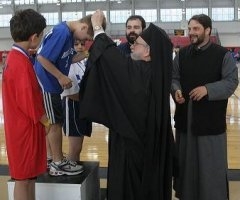 In the Spring of 1978, the Youth Department of the Archdiocese expressed a desire to expand the Archdiocesan District’s athletic program beyond basketball. The youth director at the time, Fr. Kosmas Karavellas, wanted to start a Junior Olympics program. His Eminence, the late Archbishop Iakovos, gave his blessings to the idea and a committee of clergy and laity was formed. Two of those original members, Alex Constantinou, Chairman, and Dimitrios Pamboukes, currently serve on the committee.

In May of 1979, the inaugural Junior Olympics for the Archdiocesan District was held at Queens College. Eighteen parishes participated. In the ensuing years, the Olympics grew with much enthusiasm and interest. With more of our youngsters participating, events had to be added. The one-day program became a two-day affair. Overnight accommodations also became a priority. Memorial Day weekend seemed the best time of the year to hold what rapidly became a three-day event.

The Olympics have continued to flourish. In 2007, the Olympics moved to its current location at Suffolk County Community College in Brentwood, Long Island. Last year, over 1,300 JOYANS and GOYANS, from 26 parishes, participated. The Olympics are open to boys and girls, 7-18 years of age and active in their parish’s youth program.

When teaching our children the fundamentals of our Orthodox faith and the rich history of our Hellenic Heritage through sports, we instill in them the pride and unity needed for the continuation of Orthodoxy and Hellenism in America. The Greek Orthodox Archdiocesan District Olympics is one of the most positive and exciting programs for our youth. Our goal, therefore, is to ensure that their Olympic experience is one that they will always remember, with fondness and pride.