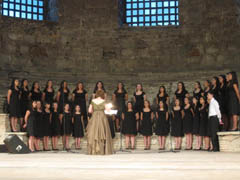 On the feast day of the Three Hierarchs and Greek Letters in January of 2001, His Eminence Archbishop Demetrios, Former of America expressed his desire to create a youth choir to display the proud roots of our Hellenic heritage through music and our youth. With his spiritual guidance, his deep love for children and the beauty of music, the Archdiocesan Youth Choir was established during the Spring of 2001. This vision became a reality under the inspirational leadership and guidance of Mr. Panikos Papanicolaou, and the talent of our conductor, Maria Koleva.

The members of the choir consist of children who are students of the Greek American Parochial, Afternoon Greek and Sunday Schools as well as colleges from our New York Metropolitan area. The choir has established an outstanding programmatic reputation and repertoire including ecclesiastic, classical, popular, ethnic and cultural songs from the Renaissance to the present day. It has grown significantly in size, becoming a prominent performing musical group. Committed to musical excellence, the choir gives talented young singers the opportunity to learn music of varied styles, collaborate with professional musicians, and perform at various prominent venues. Since its inception, the choir has been under the direction of Ms. Maria Koleva. Ms. Koleva was born in Bulgaria, where she attended the Conservatory in Sofia, studying piano with Milena Mollova. She then attended the Tchaikovsky State Academy of Music in Moscow, Russia on a full scholarship, studying Orchestral and Choral Conducting with Genadi Rozdestvenske. After graduation, she continued her studies receiving a Master’s Degree in Orchestral Conducting from the Vienna Music Academy in Austria. Her dedication to teaching and her creativity has led this choir to a level of excellence demonstrated by their performances and in the presentation of the choir as seasoned performers.

The Choir’s dedication to musical excellence and broad range of musical presentation, has resulted in unique concerts and collaborative opportunities. In addition to its annual Spring and Christmas Concerts, the following are some of the choir’s special performances: