About the Direct Archdiocesan District 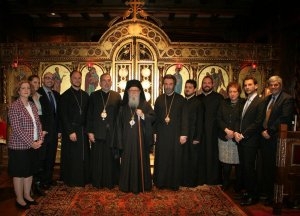 The Direct Archdiocesan District, based in New York City, is composed of 65 parishes located throughout the greater New York area, the northern suburbs, upstate New York, Long Island, the western half of Connecticut, Washington D.C. and the independent nation of the Commonwealth of the Bahamas (Nassau N.P.).

The Direct Archdiocesan District is under the direct authority, supervision, and pastoral care of His Eminence Archbishop Elpidophoros of America. This is a unique element since Archbishop Elpidophoros also serves as the Primate of the Greek Orthodox Church in America and as the Chairman of the Holy Eparchial Synod of Bishops.  Assisting the Archbishop in the administration of the Direct Archdiocesan District is the Chancellor, His Grace Bishop Andonios of Phasiane.

Chapels: St. Basil at St. Basil Academy, Taxiarchae at St. Michael’s Home in Yonkers, the Three Hierarchs Chapel at the University of Connecticut in Storrs (physically located on the Metropolis of Boston side of the state), St. Cosmas Chapel (located in the Archdiocesan Hellenic Cultural Center), and the Chapel of St. Paul at the Archdiocese of America headquarters.

Geographic entities: Approximately, eastern half of New York state, western half of Connecticut, Washington, D.C., and the Commonwealth of the Bahamas.

Some information is borrowed from the January 2012 edition of the Orthodox Observer.