His Eminence Archbishop Demetrios, Former of America commenced the establishment of the Archdiocesan School of Byzantine Music (ASBM) in the Direct Archdiocesan District in order to teach young men and women Byzantine Music.  The Archdiocesan School of Byzantine Music is a ministry that strives to offer possibilities of learning this ageless liturgical music of the Greek Orthodox Church. The school itself has over 40 students enrolled, both men and women ranging from 7yrs to over 50yrs old, and has established a professional choir (the Archdiocesan Byzantine Choir) comprised of 25 young Greek-American trained Byzantine chanters who have produced multiple albums and most recently performed their debut concert at Carnegie Hall, New York.

Since the establishment of ASBM, and the new publication of the Byzantine Music: Theory and Practice Guide, Orthodox liturgical chant has inspired many to sing a forgotten song that has nurtured the minds and souls of Orthodox faithful for over a millennium. With the recent publication of this book, along with the ever-growing popularity of the Archdiocesan Byzantine Choir, a new horizon of the beautifully refined and ageless expression of Byzantine music is in view and is already reaching the ears and hearts of many.  The Archdiocesan School of Byzantine Music is open to men, women, and children of all ages. Classes are conducted in Greek and or English according to the linguistic needs of the student. Classes are held primarily on Saturdays. 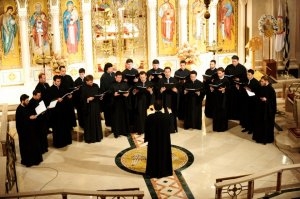 The members of the choir consist of Greek American clergy and lay chanters ranging in age from 16 to 40. Most are seasoned lead-chanters (protopsaltes) in churches of the New York Metropolitan area. All have formal training in Byzantine Music, while some hold advanced degrees from conservatories in Greece.

The choir enjoys a broad programmatic reputation and ecclesiastical repertoire with performances in various venues such as universities, churches and recital halls of NYC. Its primary mission is to share the beauty of Byzantine Music beyond the borders of Orthodox Churches and reveal the spiritual depth of this ancient form of ecclesiastical chant.

The choir’s goals are to provide a positive social setting based on the Orthodox Faith, within which members are provided with the rewards of participation in the choral arts.  Committed to musical excellence, the choir offers talented young chanters the opportunity to share the treasure of Byzantine Music with the wider public.