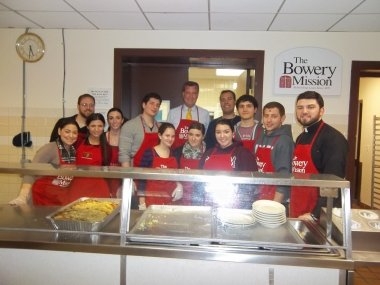 It's another cold day in New York City, but the Young Adult League of Kimisis Theotokou Greek Orthodox Church, Jim Kokotas, from Tom’s Restaurant in Park Slope and AHEPA’s Supreme Governor, and Public Advocate Bill de Blasio gave a generous hand as servers at NYC’s Bowery Mission.  All played a roll in aiding the homeless men and women, providing them with a hot meal and a warm place to sleep as the biter cold of New York passed. With over 20 helping hands, Mr. Kokotas, Mr. de Blasio and the YAL group, reached a higher anticipated goal than expected.

"Founded in 1879, The Bowery Mission's purpose and goal have been to provide help and hope to the homeless and impoverished in New York for 130 years."
The mission has served the homeless and hungry in New York City for years. The establishment is occupied by 80 people who work and volunteer in return for a bed, classrooms to be educated, and even a chapel where they can pray and devote themselves to Christ. Our YAL Group was thrilled to be apart of this endeavor!

Jim Kokotas is the AHEPA Supreme Governor for the local chapter region#3.  Right after Christmas, in light of the birth of our Savior Jesus Christ, Mr. Kokotas and the members of AHEPA helped serve food to over 200 men and women.

After a previous YAL event, Mr. Kokotas approached Deacon Demetrios Kazakis of Kimisis Theotokou Greek Orthodox Church of Brooklyn in late January and informed him of their work.  After speaking with our YAL group we agreed to help serve at the Bowery with Mr. Kokotas' help.  We thank him for all his work with AHEPA, donating his time and for all his effort!  With Mr. Kokotas’ assistance, our YAL Group helped prepare and serve enough meals to feed over 200 men and women.  We were inspired by what we saw and who we spoke to.  We greeted all who entered the mission with a smile and a warm meal, and at the same time our hearts were warmed by the mutual respect and Christ-like love we encountered!  It was truly a beautiful way to begin Great and Holy Lent!

As of Novemeber 2011, Kimisis Theotokou Greek Orthodox Church's YAL group was revived and more generous then ever. With approximately over 40 members and the encouragement from Fr. Damaskinos Ganas, we have reformed and are starting to have regular monthly events to serve our parish and community as a whole! The mission of YAL states "The Young Adult League of Kimisis Theotokou consists of Greek Orthodox Christians who gather in devotion to our Christian faith, Greek culture and philanthropic services."

We hope to continue to serve our community in many ways, bringing all people a witness of the Orthodox Faith and the love of Christ!