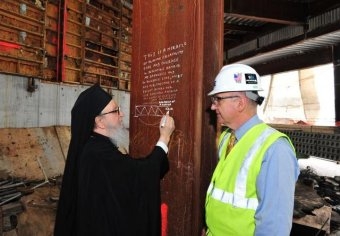 NEW YORK – “The new World Trade Center will not be whole and complete until the St. Nicholas Greek Orthodox Church is rebuilt.” With these words, Patrick J. Foye, Executive Director of the Port Authority welcomed Archbishop Demetrios and other representatives of the Greek Orthodox Archdiocese and the St. Nicholas parish. The meeting was held, June 6, at the offices of the Director for the WTC construction, Steven Plate, and included a comprehensive presentation of the planning and construction underway in the World Trade Center. The future site of St. Nicholas Church was a significant part of the presentation through architectural plans and virtual reality renderings.

Following the presentation at the office, Steven Plate, the director of the WTC Construction and his associates led His Eminence and the other participants on a tour through the construction site. They stopped in front of the site where St. Nicholas is to be built at the corner of Liberty and Greenwich streets (the south-east corner of WTC) and viewed the vast understructures for the Vehicle Security Center now under construction, which will be situated beneath the Church. St. Nicholas will be built 25 feet above street level, atop a park directly facing the 9/11 Memorial, which will receive 250,000 passers-by every day when the transportation hubs are complete.

Following a walk around the Memorial Plaza and the footprints of the fallen towers, the group took a construction elevator first to the 37th and then to the 90th floor of the One World Trade Center Tower (previously known as Freedom Tower) which is still under construction and will reach 104 floors, making it the tallest building in the western hemisphere. From that vantage point Archbishop Demetrios and his entourage were able to view the entire area of the World Trade Center, and the extraordinary work performed there, part of which will be, by the grace of God, our St. Nicholas Church.

Steven Plate, asked Archbishop Demetrios to inscribe a thought on one of the steel columns on the 90th floor and His Eminence wrote:
This is a miracle of human creativity love and courage in defeating hatred and darkness, and in building love, hope and perspective of a bright future for our beautiful America, the place of God’s love and blessings. † Archbishop Demetrios of America – 6.6.12 .

For  photos of the tour visit: http://photos.goarch.org/main.php?g2_itemId=6241

Article by Mr. Stavros Papagermanos of the Press Office and pictures by Mr. Demetrios Panagos/GOA.