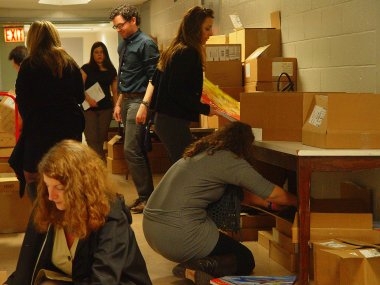 International Orthodox Christian Charities (IOCC) and the New York Direct Archdiocesan District Parochial Day Schools joined forces to distribute over $350,000 of brand new current text books to the parochial schools of the Direct Archdiocesan District. The McGraw-Hill books are provided by the Brother’s Brother Foundation and are distributed to educational programs through IOCC. Additional books are expected to be distributed through parochial day schools in Northridge (CA), and Roseville (CA), as well as other IOCC partners throughout the country. Since 2006, IOCC has delivered millions of dollars worth of textbooks annually in the US.

“Cognizant of the fact that education is an important element in the well-being and success of young people, we are thankful for the opportunity to deliver over 10,000 new textbooks, in cooperation with the Brother's Brother Foundation, to the Greek Orthodox Parochial Day Schools in the New York City area and through them, to other educational programs in their respective areas,” stated Daniel Christopulos, IOCC’s Country Representative.  “We are hopeful that we will continue this newly formed collaboration with Orthodox schools in the future, not only in New York, but throughout the country and are thankful to the Greek Orthodox Archdiocese Department of Stewardship, Outreach & Evangelism for their assistance in this activity.”

The New York District effort was implemented by Ms. Maria Makedon, Director of the Direct Archdiocesan District Office of Education and Mr. Anastasios Koularmanis, Principal of St. Demetrios Greek-American School of Astoria, NY.  Nearly all the parochial schools of the district participated in the program.

“The Greek Orthodox parochial day schools in New York City are known to local educational authorities for their excellent academic program, despite tight budgets in recent years” said Ms. Makedon. “IOCC's donation of textbooks for the elementary grades will definitely supplement and enhance their program of studies while easing their budgets.  Our schools welcome such noble endeavors, and I thank IOCC on their behalf.”

International Orthodox Christian Charities was established in 1992 as the official international humanitarian organization of the Standing Conference of the Canonical Orthodox Bishops in the Americas (SCOBA). For the past twenty years, IOCC has worked through local Orthodox churches around the world to distribute assistance in many forms.

With new book budgets in the New York area schools in the range of $2,000-$10,000 per year, this program is a blessing for our parochial school teachers and students. With the success of this initial effort, it is hoped that this will become an annual program.

In addition to providing books for our parochial day schools, the books also become a tool for outreach to other faith-based schools and after school programs in their neighborhoods. Extra books not needed by our schools may be distributed to other schools and programs that are able to put them to good use. In that way, our schools are sharing the blessing of this gift.