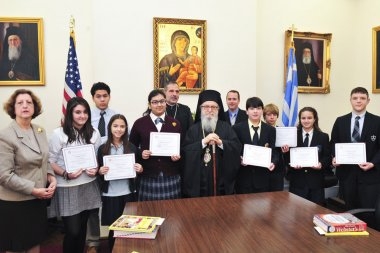 The Spelling Bee Finals for the students of the Direct Archdiocesan District Greek American parochial day schools were held yesterday, Jan. 10, at the Headquarters of the Greek Orthodox Archdiocese of America with the blessings and in the presence of His Eminence Archbishop Demetrios of America.

Eight students, all winners in school competitions, participated in the finals. Garima Vohra, an eighth-grade student of the Jamaica Day School of St. Demetrios was this year’s winner. The winning word was “lieutenant.” Perry Chresomales, an eighth-grade student of “W. Spyropoulos” Greek-American School of St. Nicholas Flushing, was the runner-up.

The other school bees who participated in the Spelling Bee finals are as follows:

Archbishop Demetrios of America presented each student with a “Certificate of Award” and the Merriam-Webster’s Collegiate Dictionary.

For the third consecutive year, the Hellenic Times Scholarship Fund (HTSF) sponsored the event and Mr. Nick Katsoris, its president and author the Loukoumi Book Series for young children, offered a scholarship of $100 to each school bee and $500 to the winner.

The Office of Education of the Direct Archdiocesan District coordinates the competitions among the New York City parochial day schools.