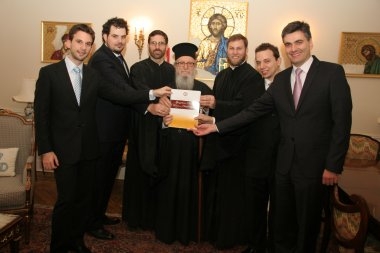 From the beginning of ASBM in October of 2010, the only sufficient textbooks of Byzantine music were available in the Greek language. After the first year of the school's operation the administration took the opportunity to re-evaluate the teaching methodology and the resources distributed to ASBM students. The result of this evaluation showed that a theory book in English was needed to keep the students fully engaged. Thus a committee was formed to oversee the publication of such a textbook with the objective of producing a student friendly book at the beginner’s level. In order to better assist each student, an audio CD was produced to help the students learn the eight modes along with the various musical exercises found in the book. Furthermore, special attention was given to the layout and graphical design of the book to make it pleasing to the eye and easy to read. Thus, the scope of this book initially focused on serving the needs of the students enrolled in ASBM, however, it has already been used outside ASBM.

Thus far, even in this early stage of publication, the Byzantine Music: Theory and Practice Guide has been in high demand. Saint Nicholas Greek Orthodox Church in Flushing, New York, has since incorporated the Byzantine Music: Theory and Practice Guide into their parochial school curriculum for grades 4th through 8th (over 300 students). Also, this book is currently being used to train future priests of the Archdiocese at Holy Cross Greek Orthodox School of Theology in Brookline, Massachusetts. There are also many local schools throughout each Metropolis of the Archdiocese that have begun to use this book as a necessary resource to train future church musicians. These chanters can in turn respond to the ever-growing musical challenges of the Greek Orthodox parishes i.e. Holy Week, weekday liturgies, Sacraments, Matins, and help enrich the liturgical worship throughout the Archdiocese.

The Archdiocesan School of Byzantine Music is a ministry that strives to offer possibilities of learning this ageless liturgical music of the Greek Orthodox Church. The school itself has over 40 students enrolled, both men and women ranging from 7yrs to over 50yrs old, and has established a professional choir (the Archdiocesan Byzantine Choir) comprised of 25 young Greek-American trained Byzantine chanters who have produced multiple albums and most recently performed their debut concert at Carnegie Hall, New York. Since the establishment of ASBM, and the new publication of the Byzantine Music: Theory and Practice Guide, Orthodox liturgical chant has inspired many to sing a forgotten song that has nurtured the minds and souls of Orthodox faithful for over a millennium. With the recent publication of this book, along with the ever-growing popularity of the Archdiocesan Byzantine Choir, a new horizon of the beautifully refined and ageless expression of Byzantine music is in view and is already reaching the ears and hearts of many.

For more information regarding this new ministry and to order the Byzantine Music: Theory and Practice Guide, please visit www.asbm.goarch.org or call (212) 570-3590.

Article by Archdeacon Panteleimon and the Orthodox Observer. Photo by Demetrios Panagos.